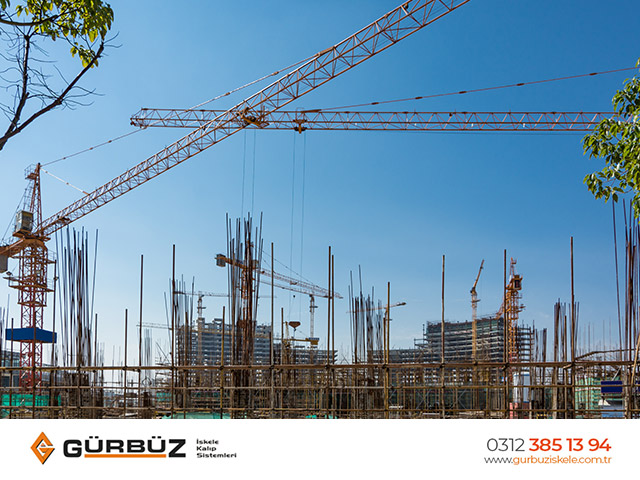 Cup-Lock Scaffolding are scaffolding systems used in all types of flooring (especially high, thick ,mushroom, with beams). The system consists of vertical and horizontal elements in different sizes. Thanks to assemble and disassemble easily and quickly, it saves time and labor. Also, it is extremely safe. It is more preferred than other scaffoldings since its easy adaptation to different projects.

The Structure of Cup-Lock Scaffolding

Lengths of horizontal element in Cup-Lock Scaffolding can be produced in different dimensions according to floor loads. It can be used as an alternative of facade scaffolding. Also, it can be used as mobile scaffold tower by placing a stair and railing on the foundation or facade.

Plywood is supported with wood beams H20 or 5-10 / 10 wood in the grid according to floor loads. The main carrier beams are placed on the four-way headers. Cuplock scaffolding slabs are supported with diagonal elements to reinforce the slab thickness, height and wind loads.

The Advantages of Cup-Lock Scaffolding

You can contact us to get more information about Cup-Lock Scaffolding and take advantage of its reasonable prices.